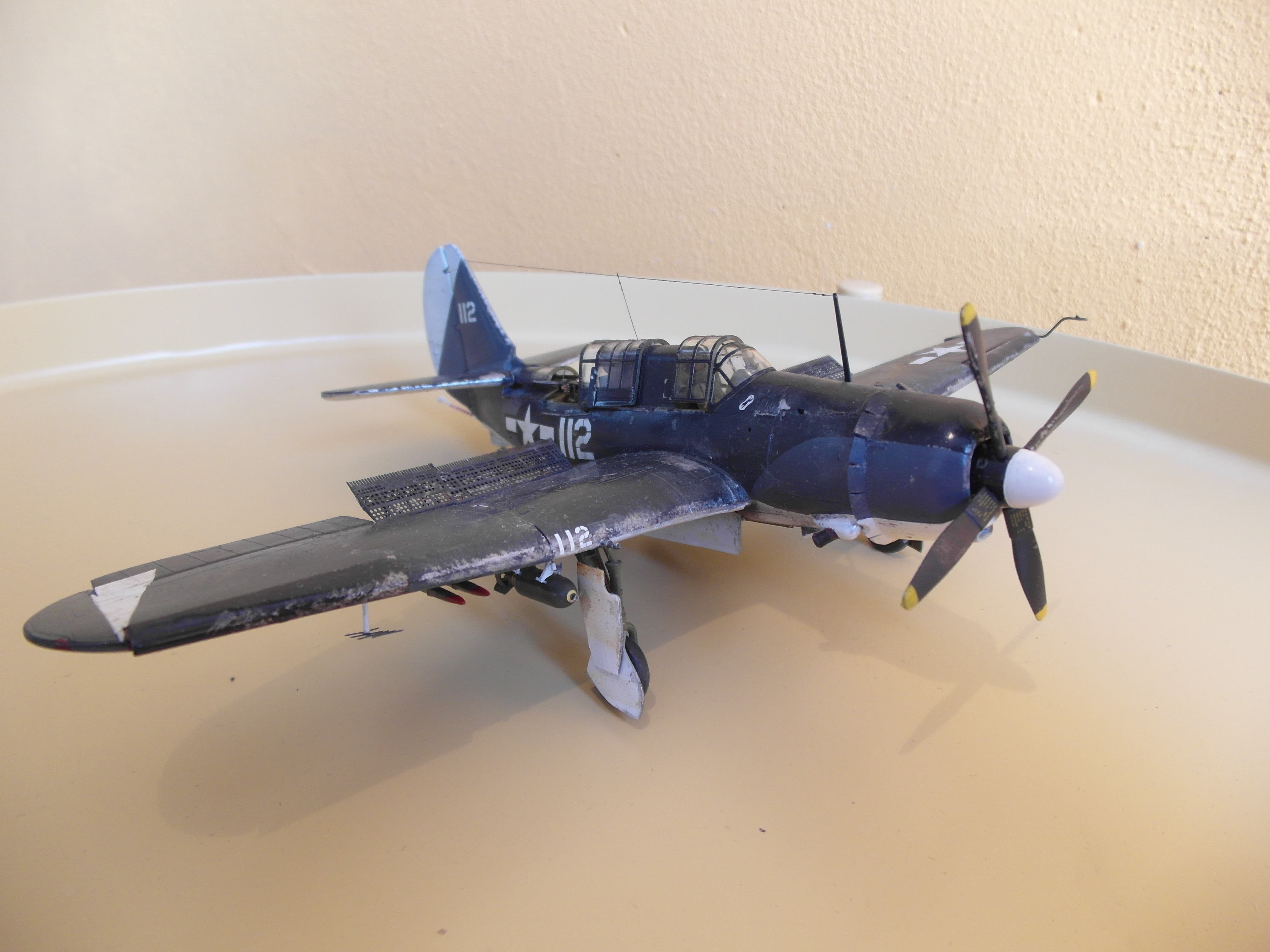 The SB2C Helldiver was an US carrier bases dive bomber. It replaced the Douglas SBD Dauntless. While faster than the Dauntless, it wasn’t really liked by pilots and carrier captains alike due to it’s large size and difficult handling characteristics. These gave the plane it’s many, derogatory crew nicknames suck as the Big-Tailed Beast, Two-Cee and Son of a Bitch 2nd Class (SB2C). Nevertheless 7140 planes were build and it saw active duty in the US navy until 1947 and served the Italian air force until 1959 and had a good service record.

This kit is very good with fine details and good fitting, however there are some big issues and some small issues with the kit I will explain throughout this post. First, the instruction manual. There are no colour indications whatsoever, some parts are wrongly labelled and the gluing positions of parts are poorly explained, making the kit a lot more difficult than it’s needs to be, and not in a good way. The decals are made by cartograf and are, as expected of very high quality. They are thin, but strong and non opaque, and with Microsol they go nicely into the panel lines.

Because i wanted to go all out with this kit I purchased the entire string of Eduard photo etch as well as additional 500lb bombs and HVAR rockets. The kit provides hard points, but doesn’t include the ordnance itself. One major point of annoyance with this kit is that the windows are very thick and thus cannot be displayed in open position, while the rest of the kit implies that they can: the area behind the turret can be build in lowered position and the windows are supplied as individual pieces. Here i accidentally broke the read sliding window trying to push it over the mid section. (Hey at least it fits now).

The 3th issue with this kit is the engine. I really don’t know what they did with this atrocity of an engine, but it sure as hell doesn’t resemble a Wright R-2600. The engine consists of two rows of cylinders, which, according to the instruction manual, should not be evenly offset from each other (hint: the R-2600 has the cylinders spaced evenly). Also the gearbox is not even close to the R-2600. Funnily they added an exhaust ring which is completely invisible. I decided this is too much and went with an after market engine by Vector resin.

Other than those issues this kit was fairly accurate and a blast to build, requiring little to no putty and sanding.

The kit gives markings for 3 variants. The first two markings are solid blue, but the VB-3 squadron has more variation with lighter blue and white sides and bottom. So my attention was drawn to this colour scene. I found a picture of the squadron in flight, as seen above. To bring a bit of variation from the given markings, I choose to build plane 112, the furthest visible plane in the picture, after 110, 107, 108 and 113. One rather odd thing to note here are the ID numbers on the leading edge of the wings. This is probably something the designers of the kit missed, as they’re not included in the instructions or decal sheet. Luckily VB-87 had their ID painted on the nacelle as well, in a similar size. They also lacked the information on the prop, but i could nick those from some old decals for a P-47 with the same Curtiss-electric propeller. One fear I had initially were the lack of warning label decals, as the Americans were notorious for labelling everything and at least some of the SB2C’s were plastered with them. luckily the picture also shows a complete lack of warning labels.