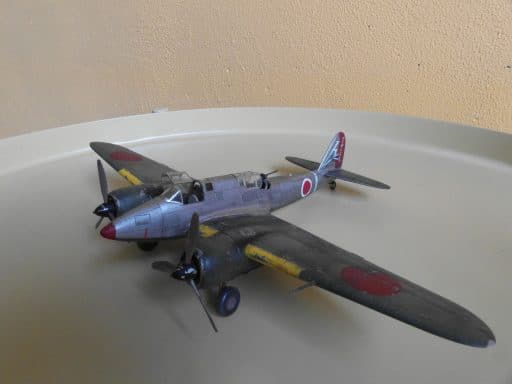 The Kawasaki Ki-45 Toryu, or dragonslayer was a heavy twin engined fighter developed for the Imperial Japanese Army Air Force in 1939. It’s development was plagued with delays, and after it’s introduction as bomber escorter in 1942, they were unable to match the single-engined American machines in aerial combat. They were relegated to ground attack roles and later bomber hunters.

As is usual for these older hasegawa kits, the exterior is very nice with fine panel lines and a good fit. However the cockpit is very basic. For this reason I purchased a resin cockpit from Pavla. While it looks nice on photo’s, it had such severe fitting issues that I oped to just trash it and build my own cockpit. No matter how I tried it was impossible to line up the side walls in such a way that the consoles fit with the floor plate.

Of the Pavla set I pretty much used only the fuel tank and the vacuform cockpits.
The particular hasegawa kit I got was for a late war variant with the rear gunner removed. As I wanted to have rear gunner open I edited the kit for that.
Most of my earlier japanese planes featured heavy weathering with large swathes of paint flaking off. With this kit i wanted some more moderate chipping, while still looking decently weathered. The Hinomarus included with the kit were very bright and thick as well, so I opted to spray the roundels on.