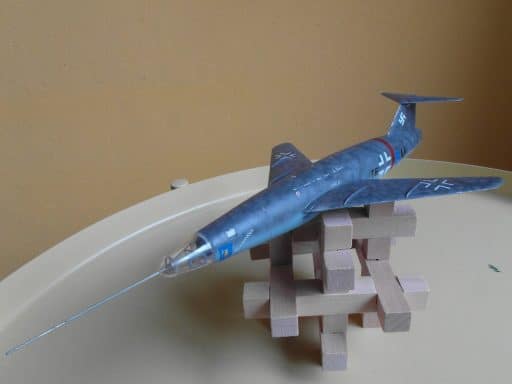 The DFS 346 was a german rocket powered aircraft. It was intended to be launched from a Dornier Do 217 mothership and fly photo reconnaissance missions over Britain. The war was over however before the DFS 346 could make it’s first flight. The partially finished prototype was captured by the Soviets, who continued research with the plane as the Samolyot 346. The original airframe never took flight, but the Soviets did fly with 3 new airframes.

Because the plane isn’t very complicated, the kit isn’t either. As to be expected from a Huma kit it is of very high quality with little fitting issues. It also contained the smallest injection moulded sprue I’ve ever seen (and none of the pieces broke!). I’ve build the rocket with the landing gear retracted because it’s quite fragile and I didn’t want to risk breaking it. Also I didn’t want to break the sleek look of the plane.

I’ve opted for some luft ’46 markings. The included markings are rather boring and the old decals had faded a bit. I’ve thus opted to build a variant that could’ve actually flown if the circumstances would’ve been different. The decals came from the spare box.