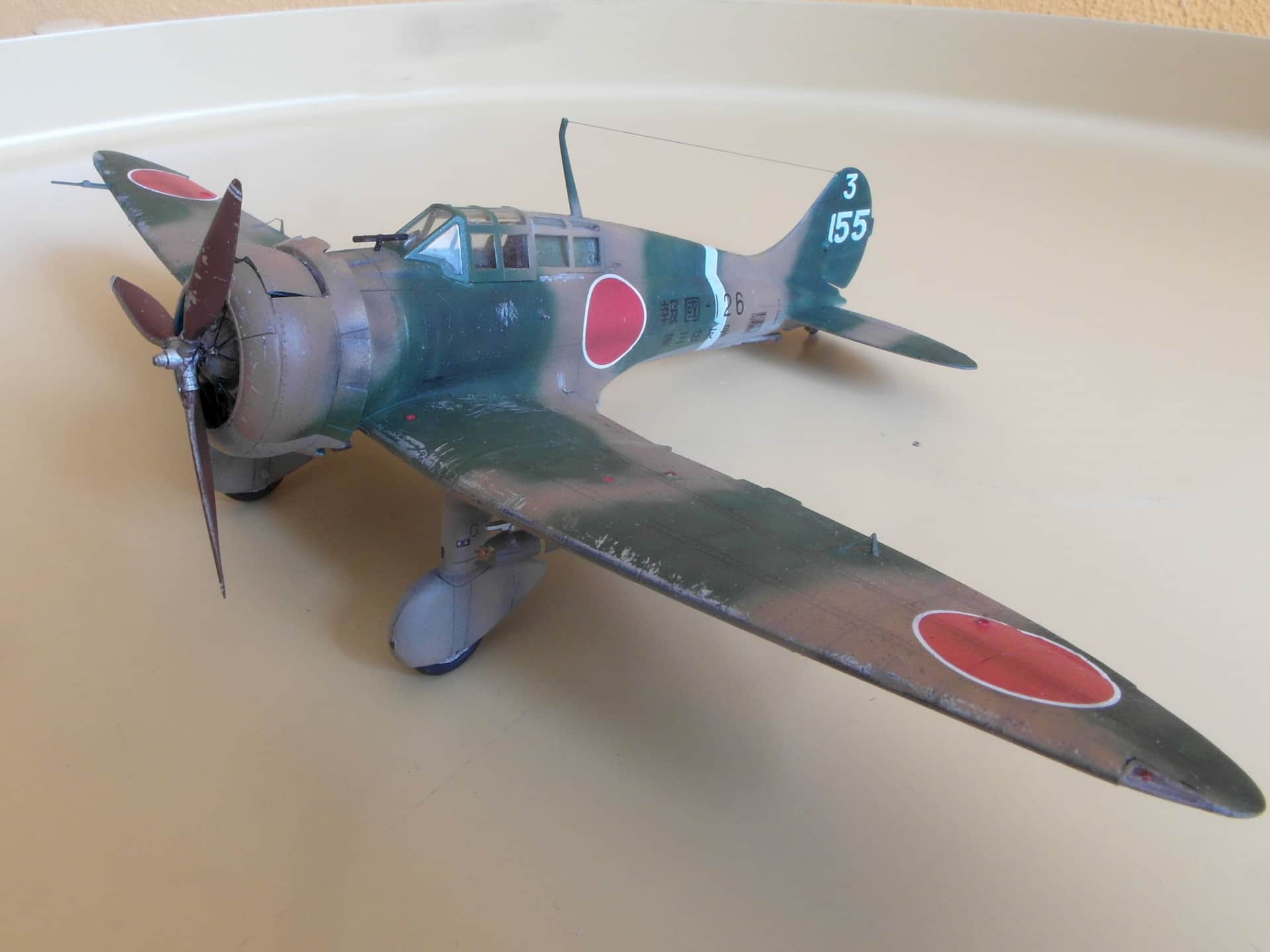 The Mitsubishi A5M, or Mitsubishi Navy Type 96 Carrier-based Fighter was a carrier based fighter from the Japanese Imperial Navy Air Force. It was the first low wing monoplane carrier fighter and the predecessor to the famous Mitsubishi A6M Zero. It first flew February 1935 and 1,094 planes were produced. They were last used in combat in May 1942, but were used in Kamikaze attacks until the end of the war.

Clear prop released their version of the A5M last year, with the closed canopy A5M2b variant. I don’t normally build pre to early WW2 models, but this one stood out to me. A newish company with an extremely detailed kit for an affordable price. I decided i needed to try it out.

The entire plane has fine surface and is free of flash.

One detail that I noticed is that the box art is mirrored, but the art on the instruction manual, which has the same composition, isn’t.

I started with the cockpit as I usually do. I glued all the parts and photo-etch together. The instruction manual isn’t entirely clear where to put the different parts. The arrows are somewhat ambiguous at best, or straight up wrong at worst. For most parts it’s luckily quite clear where they’re supposed to go, but I would highly recommend to keep the construction animation clear prop created open as well, especially for PE20 and G2. I placed them wrong, but caught it in time to correct it.

Anyway, with most parts in mostly the correct position, I began painting with covering the cockpit with a layer of AK Xtreme Metal Duraluminium. This was sprayed over with hairspray and Tamiya XF-71, using water to chip the paint. Instrument panels were painted Mr Hoby H307. Here I also ruined the instrument panel decal as I applied it too soon, and it adhered to the paint. Luckily Yahu provides very neat pre-painted instrument panels for about €2,50, so no problem.

With the fuselage halved glued together, it was time for the engine. The kit includes ban additional resin engine, but also has a normal plastic engine. To be honest I actually wouldn’t recommend the resin engine, as far as resulting looks go. The increase in detail is minimal, while providing a lot of headache when fitting it in the cowling. Unless you like building resin engines like me, I would honestly just use the plastic one.

Attaching the engine was a nightmare. The engine was slightly too large for the cover, so I had to hollow it out. The way the cowling is moulded also resulted in a seam line that doesn’t match an existing panel line, resulting in having to sand away some details to remove the seam.

In the end I decided to keep the top cover separate, so the engine details wouldn’t get too lost behind the cowling.

The kit provides options for an external fuel tank, 2 30kg bombs and a gun camera. It however doesn’t tell you that the A5M never used both the fuel tank and bombs together, only one of the two. I decided to go with the bombs as those seemed more interesting.

The kit actually comes with an additional PE set for the bombs. Apparently the bombs were to be in two parts in earlier design stages. This shows in the assembly video linked up above, and also shows in the connected fins provided on the original PE sheet. The bombs actually fit rather poor. The guide ridges aren’t deep enough. I actually cut the entire way trough and used the connected fin as a guide line for how far the fins needed to be apart.

The middle canopy was too long, so I had to sand it down to fit between the wind shield and the back .

3-155 of 1 Hikotai, 12 Kokutai. China, 1938: An brown green over beige camouflage. Flown by either 森 貢, Mitsugo Mori or Suzuki. This isn’t entirely clear and I couldn’t find an definitive source on this. There are also another A5M that flew under 3-155, but that one wasn’t the 2b version.
One mistake by Clear Prop here is that the white band is only applied to the upper surface camouflage and not the bottom, something I noticed too late. The text on the side reads Hokoku 126, meaning the 126th aircraft donated as hokogu (patriot) to the IJNAF.

3-154 of the 12 Kokutai, China 1938: An bare-metal plane with red empennage and black anti-glare on the top of the cowling. The text on the side reads Hokoku 126, meaning the 126th aircraft donated as hokogu to the IJNAF. Flown by Hideo Maeda.
Here clear prop also made a mistake, this time with the landing gear covers. Two variations are provided, an open and close, but this plane used an half-open cover.

3-165 of the 12 Kokutai, China 1938:An bare-metal plane with red empennage and black anti-glare on the top of the cowling. Same as the 3-154, this plane only has partial landing gear covers.

I decided to build the 1st camouflage, as I’m not really fond of bare metal aircraft. I started out with an aluminium base with hairspray, to chip later. On top of that i created some pre shading with black paint. The underside was then painted with Gunze H-336. As the exact colours of this plane aren’t known anyway outside of “brown” and “green”, I didn’t really bother trying to get the shade right. I used Tamiya XF-11 Japanese Navy green and Gunze H-310 for the upper surface camouflage.

The decals are of good quality, as is expected of Cartograph. However for the Hinomarus I would recommend spray painting them in hindsight, as they don’t quite go into the rivets.

All in all this was a fun build. Apart from the engine there weren’t any fitting issues, and the level of detail make this a very good kit, I highly recommend to build. If you’re an perfectionist, do pay attention with the camouflage and landing gear covers.