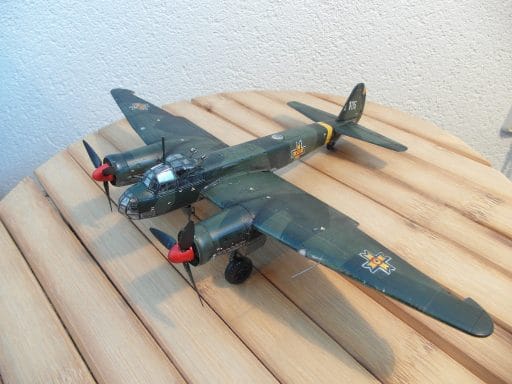 The Junkers Ju 88 was a German World War II Luftwaffe twin-engined multirole combat aircraft. Junkers Aircraft and Motor Works (JFM) designed the plane in the mid-1930s as a so-called fast bomber that would be too fast for fighters of its era to intercept. It suffered from technical problems during its development and early operational periods but became one of the most versatile combat aircraft of the war. Like a number of other Luftwaffe bombers, it served as a bomber, dive bomber, night fighter, torpedo bomber, reconnaissance aircraft, heavy fighter and at the end of the war, as a flying bomb/

The machine I build was a D-1/trop variant (later called D-3) build in June 1943. It was delivered to the Romanian Air Force. The next month it was flown to british occupied Cypruss by a defecting pilot. The British turned the plane over to the Americans, who tested it at Wright Field intensively. In 1960 it was shipped to the museum, where it is on display.
Source