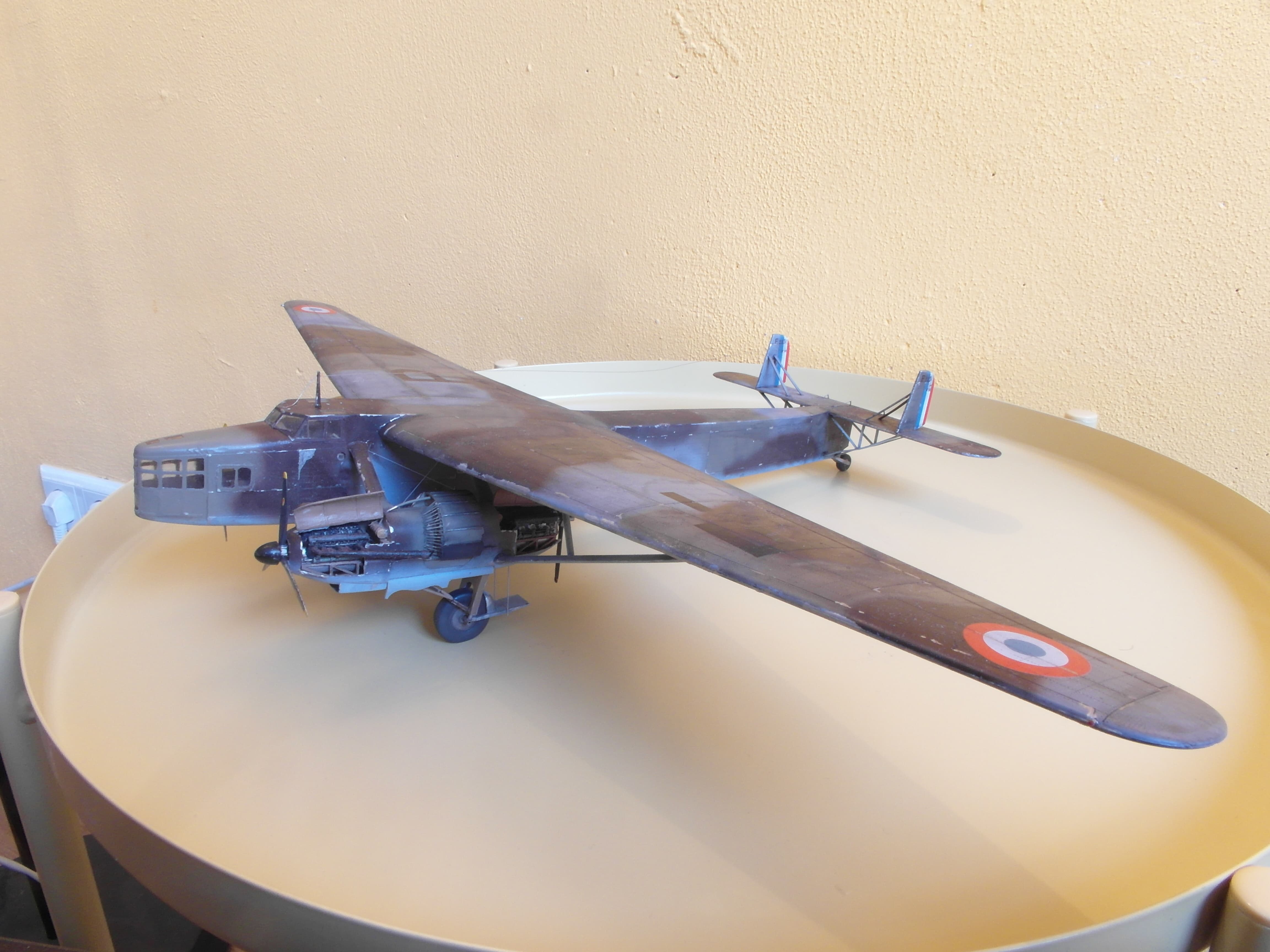 A lot of things can be said about french interwar bombers, but good looking in a traditional sense isn’t one of them. They are big, bulky and very square. The Amiot 140, the Bloch MB.200, the Potez 540 and the Farman 220 are just a grasp from the list of these flying monstrosities. However there is beauty in being grotesque, and the Farman NC.223 is certainly that.

History of the Farman F.220 series

The Farman F.220 Family started in 1929 after a request from the French air ministry for a four seat night bomber. The Farman F.220 prototype made it’s maiden flight in May 26 1932.
It was a plane with a typical French interwar configuration; high mounted wings, a square fuselage and four Hispano-Suiza 12Lbr engines in a push-pull configuration in two gondolas beside the fuselage.

While designed as a bomber, the F.220’s would actually serve as mail planes.
The prototype was sold to Air France and converted to the F.220B mail plane and was given the name “Le centaure”. Later four more planes were ordered of the same type.

Meanwhile Farman would continue development with the F.221.01 prototype, which made it’s maiden flight in May 1933. The the engines were initially changed to Gnome-Rhone 14Kbrs Mistral Major radial engines, but were later upgraded to the more powerful Gnome et Rhône 14Kdre radial engines. The design kept the stepped nose of the F.220, but replaced the nose gunners open balcony with a closed position. The same was done with the dorsal gun.
A batch of 10 planes was build with the nose and dorsal gun positions replaced with turrets and cowlings for the rear engines. At the start of the war some were still in active frontline service. These machines were however quickly retired to transport duties.

In August 1935 the Prototype F.221.01 was returned to Farman, which continued the development of the plane as the F.222.01, giving it retractable landing gear. The prototype made it’s maiden fligh at the end of 1935, and 11 F.222.1 planes were produced with more powerfull Gnome Rhone 14Kirs/Kjrs engines. The second run of 24 F.222.2’s was further modified by moving down the bombers aim, removing the step under the nose, which allowed for the nose turret to be moved further down.
An civil airline prototype F.222.0, the “Ville de Dakar” was build for Air France and powered by 4 Hispano-Suiza 12Xgrs engines.

The F.223, or NC.223 after Farman was absorbed into SNCAC, brought further improvements with a redesigned fuselage and tail section. The first prototype, NC223.1 “Laurent Guerrero” was ordered as a mail plane and set a new record in October 1937 by flying 1000 km with a 10.000 kg payload. A second prototype, the F.223.01 was developed as a bomber.

Two versions of the bomber variant were envisioned. The NC 223.2 and the NC 223.3. The 223.2, was to be powered by Gnome-Rhône radial engines, but wasn’t build. The NC 223.3 B.N.5 (night bomber with 5 crew) was powered by Hisapno-Suiza 12Y-29 inline engines. This variant was put into production, with eight machines build.
The 4th variant, the NC.223.4 was designed as a mail plane, but they were transferred into the Aéronavale, the naval air arm of the French navy to be used as long range reconnaissance. One plane, the “Julius Verne” was actually converted to carry bombs and was the first plane to bomb Berlin.

On the basis of the same concept Farman developed and build six civil airliner variants able to seat 40 passengers for Air France. The latter was however not satisfied with the plane as it couldn’t maintain altitude with three engines. After a deal they were transferred to the Armée de l’Air as troop transporters, but were quickly returned to Farman for conversion. In their new setup they could carry 400 kg of bombs and 39 Paratroopers.

Spanning more than 45 cm this is not a small kit, with 5 large injection moulded sprues and some resin fret in the box. With my kit the resin parts for the NC.223.3 were included, which don’t fit with the nacelles for the NC223.1. however a quick trip to the store resulted in the correct parts. There are no alignment pins, which can give trouble when attaching the engine gondolas. The big details are there, but the smaller stuff is somewhat lacking. I decided to spice it up by opening one of the gondolas and showing the engines within.

Because the kit’s interior lacks any details, I scratch build some ribs, tables and consoles. I was torn about adding the dorsal gunner of the NC.223.3, however I decided against it after gluing the fuselage halves together.
The manual gives the interior colour as bleu nuit, dark blue, however after some research, I couldn’t find any definitive answers if this was correct, with Chamois also cited as an interior colour for bombers. Because no interior pictures, or any documents seem to exist about this plane, i choose the lighter chamois colour, as seems to fit better in in my opinion.

Improving these was not easy, with tree mayor points that required mayor work: the cooler, the engines and the landing gear.
I initially installed the gondolas without second thought, but after looking at them for a while I decided i wasn’t satisfied with the bulky landing gear. Thus out came the landing gear, and I started creating new landing gear from metal rods and plastic sheet.
While i was at it I also decided that the partially visible engine, didn’t suffice. So I bought an after market Hispano Suiza 12Y to install instead. And when I have those anyway might as well open the hatch. Of course this was easier said than done with the plastic being extremely thick. Without my Dremel it probably wouldn’t have been possible to remove all the material from the inside to make room for the engine. Also no pictures exist of the engine bay to my knowledge, so all details are improvised.
It was after this that i decided that the cooler was also simplified too much. I added some tubing on the outside which was clearly visible on pictures, and replaced the solid front grille with a better looking one form stretched sprues.

Attaching the gondolas to the fuselage was not an easy task. The struts were mislabelled in the manual, and the rear inner upper struts are slightly too short. It took me a few tries before I got them to both point forward and sit at the same height.

I made some other improvements as well such as riveting the entire beast and scratch building the struts around the tail section as the in the box included ones seemed very thick and partially mis-moulded.

The decals were a pleasant surprise. They are strong, but not super thick and react nicely with micro-sol. The decals on the tails are however too long and need to be cut to fit.