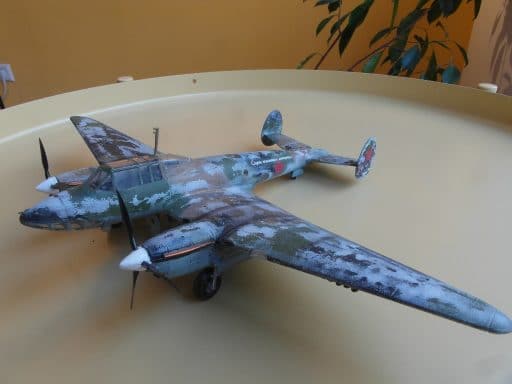 The Pe-2 “Peshka” was a soviet light bomber during the second world war. It was regarded as one of the best and most important twin engine aircraft during the war and with over 11 000 units produced it was only behind the Junkers 88 and the Vickers Wellington in numbers. Outside of it’s purpose of a tactical bomber it was also successful in the roles of heavy fighter, night fighter and reconnaissance aircraft.

At first glance the kit is pretty decent with options for a lot of variant trough unused parts. The kit has engraved panel lines with a lot of detail. However there are some glaring moulding issues with the kit immediately visible. The thicker plastic at the wing roots is misshapen with large holes. Also are the engine nacelles warped. But luckily that is about it, other that the standard lack of detail due to my high standards, so ill have to scratch build those. I decided to go for the option this box technically is meant for, with the tricolor camouflage. During the build itself more mistakes in the kit pop up, ranging from mislabeled parts in the instruction manual, to mirrored decals.

A list of the mistakes i found:
The central gunner hull piece(108B) is a few millimeters too long, and needs to be filed down to fit.
mislabeled instrument panel decals:
20->21
22->24
23->20
24->22
21->22
Also there appear to be decal option’s for a 3th and a 4th camouflage, and the location of the general markings appear to be missing.
mirrored decals, the decals of the main instrument panel 18 and 19 are mirrored over the vertical axis and thus unusable.
the pin markers between part 74B and 30B are both protruding, sanding them down on part 30 and drilling holes fixes this