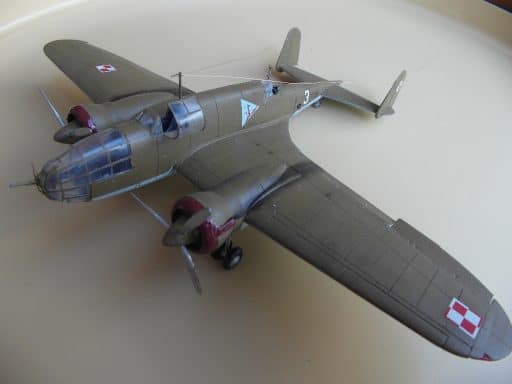 The PZL-37 Łoś or Moose, was a polish twin engine medium bomber. Upon entering service, it was one of the most advanced operational bombers in the world and attracted the attention from various nations for export. In response PZL started development for additional variants for the export market.

During the Polish invasion by Germany, about 40 units were combat operational, but suffered heavy losses due to lack of fighter protection. During October 1940, about 26 planes were evacuated to Romania, who seized the planes and put them into service for the Romanian Air force.

This kit is bad. really bad. The only redeemable quality of the kit at the time of purchase was that it was the only kit of this plane in 1:72 scale (some rare KPL vacuform from the 70′ excluded), so options were limited. However shortly after both Fly and IBG models came with very respectable, much higher quality molds.

This kit is by far the worst kit I’ve seen. The fit is very poor, the plastic barely reacts to modeling glue and the decals don’t even react to Tamiya extra thin. Due to lack of detail in the plane, I thought it was a nice idea to get additional photo etch, which made the kit more bearable, however the kit still required a lot of manual labor the make it into something decent, sanding, putty, more sanding, rescribing the panel lines, more sanding, more putty and more sanding.

The photo etch itself were rather mediocre too, with poorly fitting and sized parts and very cryptic instructions. However they were very inclusive and with a bit of work it tuned out decent.

During the build I decided that the engines were rather below standard, and looking around in my stash, I had a resin Bristol Pegasus lying around. So I copied it and installed those as well. And then the decals. At first glance they are very clear and detailed, however I don’t know what was wrong with them but if your decals don’t even react to Tamiya extra thin, something is definitely wrong. Queue aftermarket decal sheet to the rescue.

The result is honestly not bad, but if you consider buying this kit as a cheap starter, don’t.