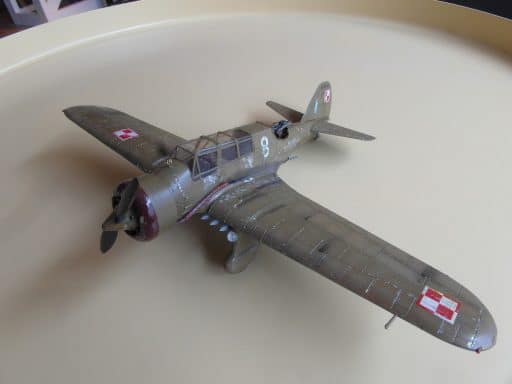 The PZL.23 karaś (crucian carp) was a Polish light bomber and reconnaisssance aircraft from the 1930’s

The kit is surprisingly good, it being IBG’s 2nd air plane kit or a relatively uncommon aircraft, with very good detail inside the cockpit, and on the outside. One pet peeve I have with this kit is the somewhat weird way they decided to construct the cockpit, which makes it very easy to mess up. There is also a rather large thing on top of the cockpit, however I couldn’t find a single picture with that thingy, so I left it off

Because i wanted to go all out with this kit I purchased the entire string of Eduard photo etch as well as additional 500lb bombs and HVAR rockets. The kit provides hard points for those, but doesn’t include the ordnance itself annoyingly. One mayor point of annoyance with this kit is that the windows are very thick and thus cannot be displayed in open position, while the rest of the kit implies that they can: the area behind the turret can be build in lowered position. Here i accidentally broke the read sliding window trying to push it over the mid section. (Hey at least it fits now). The 3th issue with this kit is the engine. Other than that the kit went together quite easy, which together with the good quality decals made for a nice little high quality kit.

There are only markings for a single aircraft during two different periods of it’s life. The differences are subtle with both planes having a khaki topside and a light blue bottom.