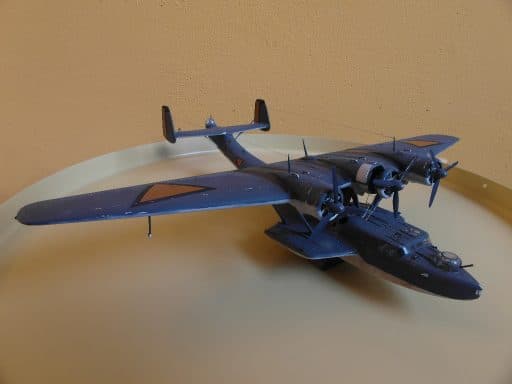 If I’d had to pick the plane that got me into world war two era aircraft, it would be the Dornier Do 24. This because a museum near me, the Militaire Luchtvaart Museum (Military Aviation Museum), now merged together with 3 other museums to Nationaal Militair Museum (National Military Museum had one of these aircraft on display as a centerpiece. For some strange reason i always remembered that aircraft as a consolidated PYB Catalina, which was also at that museum. So when i saw a kit for this aircraft i couldn’t help but get excited to replicate the aircraft that got me interested in WWII aviation.

The Dornier Do 24 was designed for the Dutch navy to replace the older Dornier Wal aircraft in 1936. Before the outbreak of the war 37 Dorniers were delivered and send to the Dutch East Indies, where they fought against the Japanese invasion. in 1942 the 6 surviving aircraft where transferred to the Royal Australian Air Force, making the Dornier one of the few aircraft serving operationally for both sides.

The Dornier at the NMM hasn’t been in service with the Dutch Navy, but is a T-3 variant that has been build for Germany and later served in Spain. During it’s restoration in ’91, ’92 it was repainted in the original colors of the K-1 “X-24” plane.

The kit looks good with recessed details and panel lines, albeit few, and extruded rivets. The mould being from 1978 I’d say it has aged rather well, especially with the upgrade to the cockpit later on with an additional sprue. This improved cockpit also means the kit has some overlap with the AIMS set, which was designed for the older cockpit, providing only the front part where the pilots sit. The new sprue also provides a radio room while greatly improving the front. Strangely Italeri decided that pilots were no longer necessary, removing them from the old mould together with rest of the old cockpit.

For the engines i decide to mimic the configuration used at the old museum, with the middle cowlings open. Later on i decided to only open the right one to maintain structural integrity. Because the engines included are the T-3 variant with BMW Brame 323R-2 engines, and the K-1 variant used Wright R-1820 Cyclone engines, some editing to the cowlings was required. Mostly shortening the cowlings, but also creating the frame behind the engine that is visible with the cowling open.

The plane is painted in the two color marking used by the Dutch navy, an off white bottom and a dark gray top. Because the kit itself doesn’t include decals for a dutch variant, i had to paint the markings myself. Unlike the plane in the NMM, I decided to paint it with the large orange neutrality triangles. The designation X-10 was chosen because I could make those from some decals I had lying around. Some medium weathering is applied.