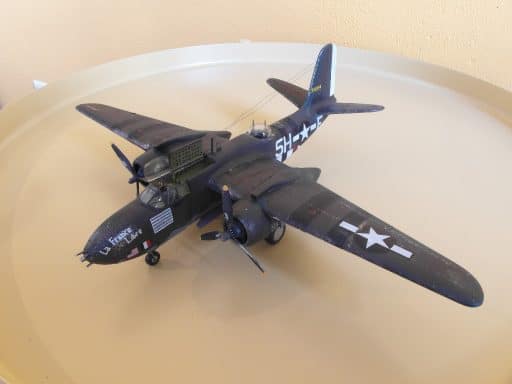 The Douglas A-20 was a light bomber, attacker, intruder and reconnaissance aircraft serving both the Americans, the Soviets, the British and the French during the second world war, and many more afterwards.
The G variant was the most produced of all variants, with 2850 machines build. The first batch of 250 had 4 20mm hispano cannons and two .50 browings. The inaccurate cannons were replaced with more .50’s later.

A nice, little kit with good details. As is rather common with MPM kits, the bomb bay is closed. Because i like my planes with an open bomb bay, i scratch build one. The decals are rather fragile, with a few tearing on me, but they sink nicely into the panel lines.

The kit gives markings for 4 camo’s, but differ not very mutch with all a gray underside and an olive topside and invasion stripes. I liked the La france Libre nose art and backstory best.
The Machine, nr. 43-9224, was the first aircraft to fly a 100 missions over France. Originally named Miss Laid, it was renamed to be more politically correct when taken for ceremony to Paris to honor the accomplishment. Note that the old nose art is still faintly visible through the olive drab